Taos Fly Shop is a full service year round fly shop. It was the first fly shop in Taos, opened in 1980 by Taylor Streit. Taylor closed the shop in ’87 though he continued to guide the area while authoring three books on the subject. After a 17 year hiatus, Taylor’s son Nick re-opened the Taos Fly Shop in 2004. Nick still owns and operates the store while Taylor manages the guiding business, using the shop as his base.

We pride ourselves at being friendly and helpful, providing an easy going, non-intimidating atmosphere. We carry a great selection of equipment for all price ranges and experience levels. Whether you’re looking for technical advice on equipment, the “hot fly”, or your first fly rod, Taos Fly Shop is happy to help. We are located on the main road in Taos (hwy 68- Paseo del Pueblo Sur) half a mile south of the plaza on the west side of the road. In the summer months we are open from 8am to 6pm every day.

In November of 2015, Taos Fly Shop moved from its historic location.  Now 200 yards further south (still on main road) the new shop boasts over 2500 square feet of retail space.  With this expansion, we are pleased to offer our customers the largest selection of fly fishing equipment, tackle, and outdoor clothing in northern New Mexico. 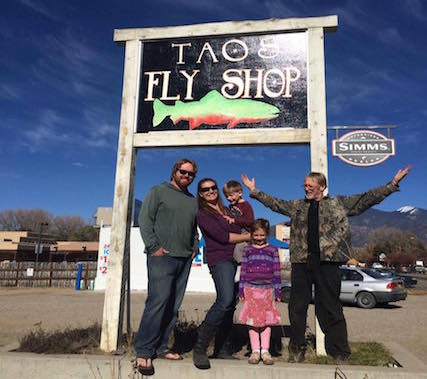 Taos Fly Shop And The Legend of Super Fly

Taos Fly Shop actually had two previous locations in the 1980s, both on the main drag and in the old Sleeping Boy Building on the corner of Este Es Road. The shop was relocated to its current location after a vehicle drove into the building late one Saturday night. (Further reading might lead one to suspect that one of the Taos Fly Shop gang was the invader, but this is not the case.)

There were other unfortunate happenings that collided with Taos Fly Shop's success. It was opened at about the same time that molybdenum was in demand and Molycorp in Questa made a big underground move. That intense mining virtually killed the fine fishery on lower Red River. And, of even greater consequence, the mighty Rio Grande-from its junction downstream with the polluted Red-could not sustain trout over a foot long.

The prosperity of the fly shop was also limited because the proprietor, known only as "Super Fly," was an unreliable rapscallion. The "Gone Fishing" sign was often in the window, and if you got into the shop there was another sign suggesting you make your stay brief. This sign, which stated: "You here again?-another half hour shot," was there because fly-fishing riffraff, groupies, and wannabes were forever hanging out. The sign was, of course, ignored, and low-life anglers littered the place. These guys went mostly by aliases, like Wild in the Streets, Wild Wags, and one fellow named Tribe, who made daily stops with a stolen bottle of "Lucy" stuck in his drawers.

Because Super Fly was often out on some fishy mission, your salesperson was likely to be Richard, the jazz singer. Since he had never fished a day in his life, the poet/singer's fly recommendations were based on the artistic qualities of the flies' names. "Try an Egg Sucking Leach, Humphy, or Poundmiester," he'd love to say. Super Fly would try and set him on track by leaving a list of flies that were working, but if he considered the names bland he simply made up new ones. "They're taking the Blue Bellied Bivisible and the Harvard Lackey," he'd say.

Of course nothing could surprise the gang of "fly-fishing thugs" but things went on inside that sometimes offended or mystified real clients. I have a hard time believing some of the things that Super Fly did, but old friends and clients tell of so many odd incidents that I find it difficult to dismiss them all. Last year I heard a story from some folks who had come in the shop away-back-when; they said that they had arrived just as Super Fly was whipping up a combination of beaver and Hare's Ear fur for the mighty Poundmiester Fly. This was done in a blender. As it whirled, the air filled with hair-and the poor souls were sneezing and coughing. When they asked Super Fly why he didn't have a top on the blender, he simply stated, "It doesn't need a top."

I asked one guy who worked there what he remembers of the olden days, and he said his favorite story occurred one morning just after he opened the shop. Super Fly pulled up in a red Cadillac convertible with several other "fishermen." He said that the gang was sitting amongst a tangled mass of rods and reels and they told him that they had been fishing all night and were back in town to get supplies and "tie up some flies." Super Fly proceeded to sit at the fly-tying bench and whip up some fly that "looked like a bunch of crap on a hook." He said that when Super Fly got up, he knocked over a box with a thousand hooks, and the gang proceeded to crawl around and pick them up. Apparently some gang members were spent from the long night of "fishing," and finding themselves so close to the floor put them in restful mood. Soon, a couple of them were fast asleep. When tourists walked in soon thereafter they quickly did an about-face rather than step over these fly-fishing thugs. This was quite the spectacle for Jhara, the 17-year-old farm boy from west Texas who had thought of fly fisherman as tweed wearing, pipe smoking gentlemen.

No doubt the reader has the impression that professionalism was lacking at Taos Fly Shop. But, in its way, excellence abounded when it came to putting people and fish together. This is where yours truly, Hall of Fame guide Taylor Streit, made a name for himself, and many a fisherfolk got their first fly rod, or learned to tie flies in late night classes. There were even lessons on how to skin and preserve road kill varmints for the tying bench. And Super Fly created innovative fly patterns like the Shit Fly and Fly Line Damsel. Many a fish was caught and released from the conservation efforts encouraged by the shop.

Nobody really knows what happened to Super Fly. He started resembling the flies he tied, with feathers stuck in his beard and fur sprouting over his body. A month after his disappearance, I arrived and found the back door of the shop unlocked. Mercifully, the shop's contents were unmolested. There was a dire atmosphere, and the discovery of the carcass of a large coyote in the freezer added to the dark mystery. Had Super Fly regressed that far? Bill collectors, sheriff's deputies, and Super Fly's "fishing associates" from Espanola prowled the area. But he was nowhere’ s to be found. So the flies and gear were sold off, the cases dispersed, and the page closed on the legendary first full fly shop of Taos.

But the sign of the six-foot rainbow was stuck away in storage in case it should be called upon for service. And sure enough, here comes Poundmiester Junior, Nick Streit, and his wife Christina, both of clear head and heart-and great resumes in the fly fishing business. The new Taos Fly Shop started out on the lean side, but lacking the dead varmints in the freezer or fur flying through the air. The latest in flies and gear is on display in the now expanded shop as well as flies like the Poundmiester that have worked for decades on the Rio. It is also the home of Streit Fly Fishing and you can book guided trips in New Mexico, Colorado, or Argentina. 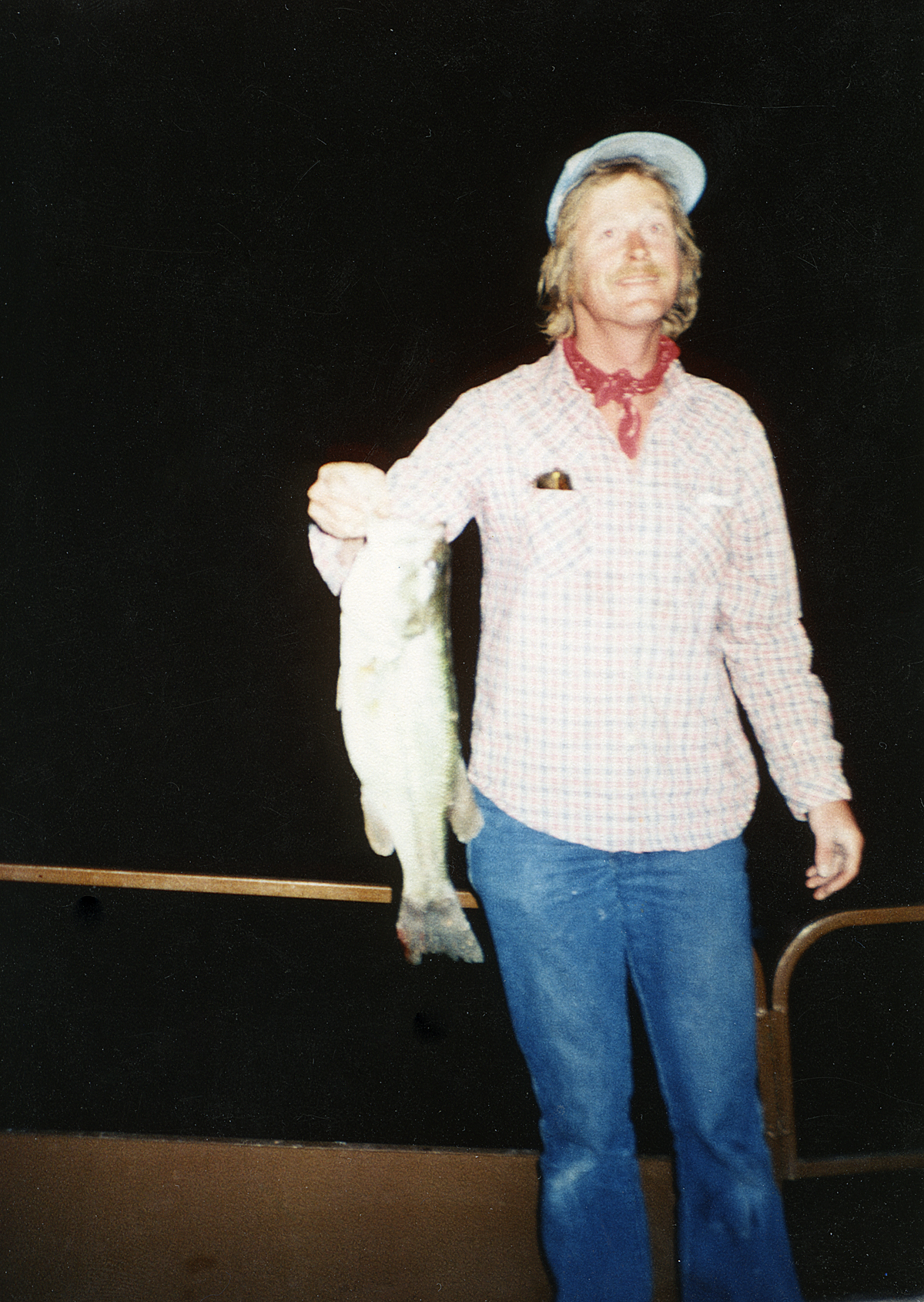